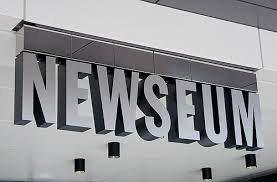 Today the WJMC schedule had us at the Newseum for the majority of the day. For those of you who don’t know what the Newseum is, it is a museum in Washington, D.C. that focuses on the history and evolution of the media and journalism over the years. There were a lot of interactive exhibits, where they tested our knowledge on everything from our First Amendment Rights to the moral standard that journalists hold themselves to every day. Some of my favorite exhibits were the Anchorman exhibit, the 9/11 exhibit, and Pulitzer Prize Photo exhibit.

The Anchorman exhibit was arguably the least educational exhibit in the Newseum, but it still highlighted the very real struggles of women trying to make a living in the media in the 1970’s. There were plenty of photo ops, and movie trailers showed in the Anchorman gift shop.

Obviously, the 9/11 exhibit chronicles the events that happened on that fateful day. They had a movie showing how the reporters survived at ground zero, and what they risked to bring the world live coverage on one of the most tragic dates in American history. The Newseum even had a piece of one of the mangled antenaes on one of the twin towers.

The Pulitzer Prize Photo exhibit was one of the most inspiring exhibits, in my opinion. In addition to a display with all the various winners of this prestigious award, there was a short film, where the photographers were interviewed for their thoughts when they captured these moments forever on film. As one person in our group stated, a lot of these photos depicted depressing times and moments, what I took away from this exhibit was that despite the sorrowful nature of many of these photos, there was a glimpse of hope, either for loved ones, un-showed, or for the very uncertain future.

In addition to these exhibits, the Newseum had a section of the Berlin wall displayed, a 4-D movie chronicling the history of some famous reporters, including Nellie Bly, an amazing food court, and on the top floor, an observation deck with a magnificent view and Newspaper headlines from around the U.S. that day.

All in all, my visit to the Newseum was an enjoyable experiance. I only got to see and do about half of what the Newseum offers, so to do this museum justice, at least two days are needed. I highly recommend anyone with an interest in journalism, or even history, this museum gives you a look inside the reporters head, and shows what goes on behind the blue screen.